With French jets pounding the Islamic State stronghold of Raqqa, US planes targeting its oil tankers and Kurdish forces splitting a supply line from Mosul to Raqqa, the past three days have been among the most difficult that the terror group has faced in its self-declared caliphate.

As the dust settles, Isis’s hold on its original territory and revenues is, perhaps for the first time, showing signs of slipping. The group has lost control of the highway linking the two main hubs of its heartland. And the parallel oil trade, which had generated as much as $40m (£26m) a month even while refineries were being bombed, is now in jeopardy.

The Raqqa strikes, 20 in total, targeted parts of the city that had not been hit before, including a sports stadium, a museum, an equestrian centre and several administration buildings.

Residents questioned the usefulness of the strikes, suggesting they had no military purpose – a claim countered by French officials who said planners of theParis attacks on Friday had given final instructions to the suicide bombers from within Raqqa, and that training camps were a primary target.

Further east, near Syria’s border with Iraq, there were repeated US strikes on oil tankers that transport crude from makeshift refineries. Oil production sites have been hit before, but not the tankers until now. US officials said 116 tankers were destroyed on Sunday, hobbling a distribution system that, along with taxation, accounts for much of Isis’s revenues.

The US military said it had dropped leaflets near tankers queuing near a collection site, warning them of an imminent attack. An estimated 300 trucks were in the area at the time. Officials said they had not targeted the trucks before now, fearing civilian casualties. There were no reports on whether drivers had been killed.

To the north-west, across the defunct border with Iraq, Kurdish forces spent Monday mopping up after recapturing the town of Sinjar from Isis forces who had seized it in August 2014, enslaving many residents and exiling others.

What remained of the Isis presence there had been bulldozed into the side of the town’s roads. Identification documents of the Islamist group’s recruits, stamped by inked thumbs, fluttered down one main road hours after the last member had fled.

Over the weekend, the few Sunni homes in a city that had been an ancient homeland of the Yazidi sect were burned by returning Yazidis. Isis had done the same to every Yazidi home it could identify. Barely a building in Sinjar is habitable, but Kurdish peshmerga forces have pledged to reopen it to residents within several weeks. 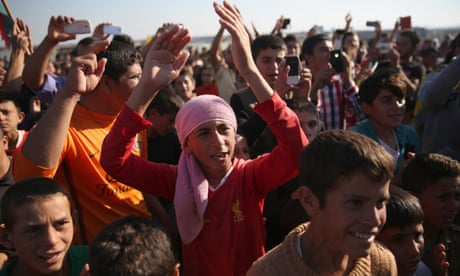 ‘Tyranny has gone’: Kurds and Yazidis celebrate recapture of Sinjar from Isis

The fall of Sinjar had been a symbol of Islamic State’s unchecked brutality and dominance. The town’s recapture, after two days of resistance, reflects a far less robust local organisation, 15 months on.

So hasty had the retreat been that Isis did not have time to lay improvised explosives, which had been prepared in two buildings, both of which were discovered by the Kurds and their locations passed on to circling US and British jets.

But the worst fears of Isis brutality seemed to be confirmed with the discovery of two mass graves on the outskirts of the town, scattered with cast-off women’s clothing. Sinjar residents who fled when the marauders arrived have told peshmerga forces that the graves probably contain women who were captured and deemed too old to enslave.

Kurdish officials said they did not know whether Isis militants who fled to the nearby towns of Baaj and Bulaj took captive women with them. However, they claim the group took as many as 300 bodies of its own fighters to Mosul for burial. Isis’s estimated fighting force in Sinjar before the town fell was 600-700.

Kurdish officials say the “caliphate” declared by the Isis leader, Abu Bakr al-Baghdadi, is no longer the contiguous swath of land, roughly the size of Jordan, that it was earlier this year, having been fragmented into areas centred on Mosul, Anbar and Raqqa.

“We have severed the Isis caliphate in at least three strategic areas: between Tal Afar and Mosul, Tal Afar and Sinjar, and Sinjar and Syria,” said Masrour Barzani, the security chief of the Kurdish regional government, whose forces led the operation, with US air cover.

The Kurds have been quick to claim that Sinjar will remain under their control, along with Kirkuk further east. But they also warn that although the tide may be turning in the region where Isis began, the militant group remains ascendant elsewhere.

“Although Isis is no longer the same as it was in 2014, they still are capable of recovering if pressure is lifted on them,” said Barzani. “They pose threats to us and the rest of the world. They still control vast areas, rule over millions of people and are expanding in other parts of the world like north Africa. Isis may have lost conventional fighting capabilities, but they are adapting themselves to new tactics and forms of terrorism, such as what happened in France.” 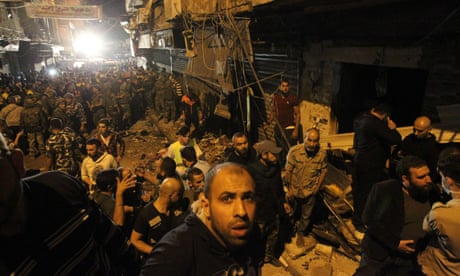 In being able to organise an attack of the scale that took place in Paris, within 10 days of apparently bringing down a airliner in Egypt, and carrying out bombings in Tripoli, Baghdad and Beirut, Isis has shown an international potency that it did not have a year ago. In 2014, sympathisers and cells of the group existed in all these locations, but without the capacity or reach that they have shown lately.

Isis members travel relatively easily to Turkey and several of its senior officials have boasted that the migrant route offers opportunities to move fighters toEurope and beyond.

“I truly did not think that they could do this yet,” one member of Isis with links to the group’s decision-makers said on Sunday. “I thought they would have to make deals with the international al-Qaida groups. Earlier this year, they could not do this by themselves.”

The loss of ground in the self-declared caliphate, the deaths of an estimated 9,000 fighters – 1,500 of them in the failed defence of the Kurdish border city of Kobani – matters far less if Isis leaders can still choreograph spectacular attacks, and its satellites can wreak havoc of their own, with less direction.

“They said they wanted to cause havoc everywhere,” the Isis member said. “Well now their offspring can do it for them.”

Late on Monday, the French president, François Hollande, said France was at war. Hours earlier, Isis said in a statement that any member of the US-led air coalition fighting against it would be a target. They were the same threats it had made throughout the past two and a half years of the group’s latest incarnation. This time, people are listening.